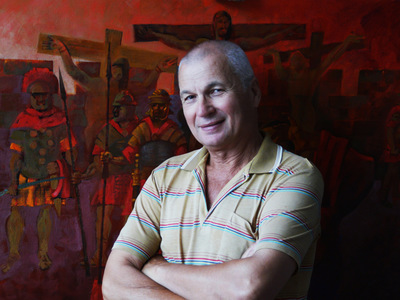 The painter Vasiliy Ptyukhin was born in 1948 on Iturup island (the Kurils) at the foot bottom of Bogdan Khmelnitsky Volcano. He graduated from the Far Eastern Institute of Arts, painting department. Now Vasiliy Ptyukhin lives and works in an old Russian town called Vologda. His works have been demonstrated at the regional, district and international exhibition. They also belong to the private collections in Russia, the UK, France, the USA, Germany, Hungary, etc..
The artist works in a realistic manner of painting, mostly in direction that is not aimed at a maximum naturalistic depicting, but at a symbolic comprehension of the plot.
It's very important to say that the very fact of Mr. Ptyukhin's turning to historical topic is not at typical of contemporary art nowadays. Pictures from antique history, gospel episodes, scenes from Russian history have become key themes for Vasiliy Ptyukhin in his work. Brief and laconic in composition, quite conditional in color, his pictures tend to express certain symbolism o.(implication behind the canvas (such are the following pictures: “Brut”, “Pair of dice”, “Amazons washing horses”. If we look at such works as ”Camerata” (a portrayal image of poetic and musical quantette), “The boy on the rainbow” (his son's portrait), his wife's portrait and his own one, we could also feel these association and symbolism) penetrating into the canvas.
The emotional expressiveness of Mr. Ptyukhin's pictures is built on using a so-called pure open colour (live red-in “Tzar Bride”, bright yellow in “Archbishopric pond” landscape. Colour richness and decorativeness are traced both in the artist's landscapes and still lives.
Monumental by form, locally peculiar by color, tending to a mysterious symbolism compositionally, Ptyukhin's works are sure to find it's audience among art lovers.
Телефон: +79212332156
E-mail: tyukhin@mail.ru" class="mail">ptyukhin@mail.ru