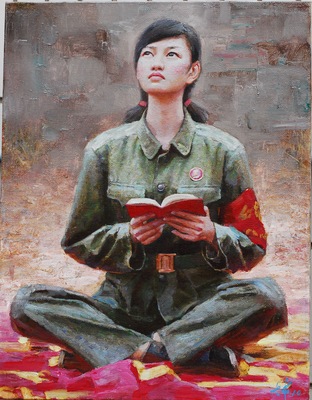 Sitting in the lotus position, reading Mao's little red book, it is as if she is in prayer. It reminds me of how saints were portrayed in Italian Renaissance paintings. Mao is the golden sun, in Beijing, who brings hope of a new life to China. Of course, the life that he brought many of the Red Guard Girls and the rest of the people of China was not exactly what they had in their hopes and dreams.
I particularly like the red color, in her blanket, which is a new color that I have seen enter Zhang's palette, only recently. The sloppy mason work on the wall, in the background is a trademark of Chinese masons, something I see in every building.

Bather from the Back