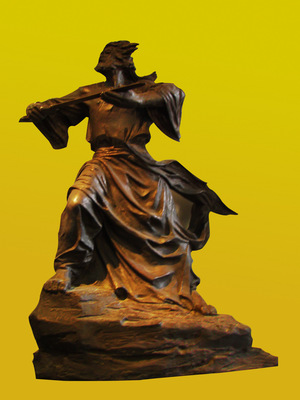 Yuan Chong Huan, born in Guangdong, was a military leader, during the Ming Dynasty, who could not be defeated. During his early years, he had the chance to meet and interact with Jesuits and other foreigners, whereby he expanded his knowledge of the world. Eventually, he was sent to the northern front and was one of the first Chinese commanders to successfully incorporate Western military tactics into his battle plan. As a result, he was key in successfully defending against a number of attempts by the Manchurians to conquer China, in the 1600's. As he was undefeatable on the battlefield, in order to defeat him, his enemies spread rumors about his loyalty to the emperor. In fact, it took a hundred years before his name was cleared by the Qianlong Emperor.
In this piece, you can see the profound influence that Michelangelo's work has had on Pan. The sculptural style, along with the flowing robes and hair, remind me more of a Renaissance piece than one from twentieth century China. In fact, it is my favorite piece out of all of his sculpture, and the story behind the sculpture is a great example of the type of social and political commentary that Pan likes to make with his art: mesmerizing the eyes of those who see it, while touching the hearts and minds of those who also understand its deeper meaning.