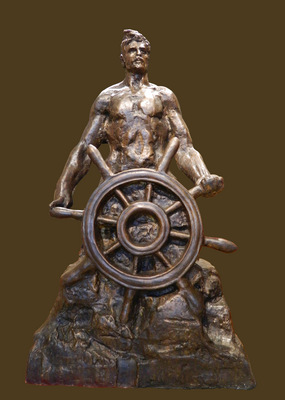 Pan He says he only creates sculpture when he has something to say. While some may look at this sculpture and believe that it means that the country is being steered by a strong hand, the real meaning is a question: in what direction will my country eventually be steered? The Helmsman's strong upper body rises from the rocks, emphasizing his strength and steadiness. Thus the question becomes is he really strong or just immovable?
While some artists create statues of monotonous red faced men and call it social commentary, we like the more subtle social commentary that Pan He makes in his sculptures.