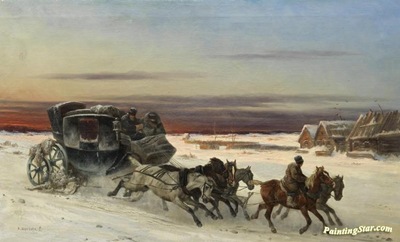 A chariot is a type of carriage driven by a charioteer, usually with the aid of horses, to provide fast propulsion. Chariots were used by armies as transport or mobile platforms for archery, hunting or racing, and as a conveniently fast way of travel for many ancient people. The word "chariot" comes from the Latin word carrus, borrowed from the Gaulish language. The war chariot or chariot used in military parades was called a car. In ancient Rome and other ancient Mediterranean civilizations for big, it required two horses Triga - three and Quadriga - four.

The chariot was a fast, light, open two-wheeled vehicle, pulled by two or more horses chained side by side, and was slightly more than a floor with waist-high fencing at the front and sides. It was originally used for ancient wars in the Bronze and Iron Ages; but after its military capabilities were supplanted by the cavalry, as the horses gradually grew larger, the chariot was used for travel, in processions, for games and races.

The most important invention that made it possible to construct a light chariot drawn by horses, was the wheel with spokes. The earliest spoked chariots date from c. 2000 BC Many famous conflicts have been fought with chariots, such as the Battle of Kadesh. Chariots lost their military significance by the 1st century AD but continued to be popular for racing and military ceremonies.