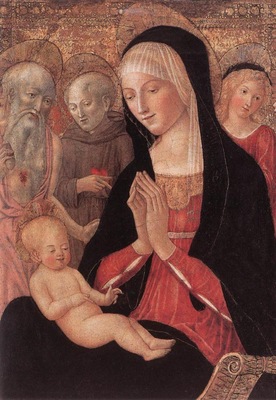 Francesco di Giorgio Martini (baptized 23 September 1439 – 1502) was an Italian painter of the Sienese School and a sculptor, as well as being, in Nikolaus Pevsner's terms, "one of the most interesting later Quattrocento architects'" and a visionary architectural theorist; as a military engineer he executed architectural designs and sculptural projects and built almost seventy fortifications for the Federico da Montefeltro, Count (later Duke) of Urbino, for whom he was working in the 1460s, building city walls as at Iesi and early examples of star-shaped fortifications.