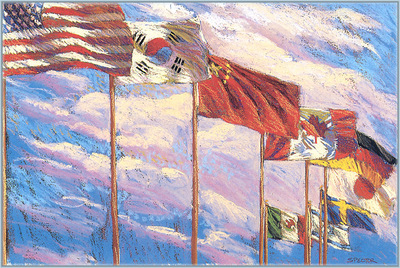 Biography:
Known for his images of elegance, Joel Spector was born in Havana, Cuba and came to the United States at the age of twelve. Graduated from Fashion Institute of Technology and attended the Art Student’s League. He started out in the field of fashion illustration then moved on to general illustration and has been working with prominent accounts throughout the years. His work has appeared in books, children’s books, magazines, newspapers, advertising and annual reports. He is a member of the Pastel Society of America from which he has won Gold Medal awards, Society of Illustrators award winner, Best in Show at the Kent Art Association. His work has been featured in Artist’s Magazine, Pastels International, international magazines and featured in Best of Pastels. A documentary was produced for Japanese television showing his working process. Presently working on murals besides illustration, Mr. Spector also does commissioned portraits and his work has been included in some prominent collections. He has taught a FIT, Wooster Community Center for the Arts and at Western Connecticut State University. He lives in New Milford, CT.

You can write email him also:
joel@joelspector.com