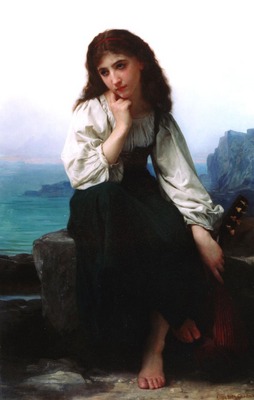 Elizabeth Jane Gardner (October 4, 1837-January 28, 1922) was an American academic and salon painter, who was born in Exeter, New Hampshire. She was an American expatriate who died in Paris where she had lived most of her life. She studied in Paris under the figurative painter Hugues Merle (1823-1881), the well-known salon painter Jules Joseph Lefebvre (1836-1911), and finally under William-Adolphe Bouguereau (1825-1905). After Bouguereau's wife died, Gardner became his paramour and after the death of his mother, who bitterly opposed the union, she married him in 1896. She adopted his subjects, compositions and even his smooth facture, adopted them so successfully that some of her work might be mistaken for his. Gardner's best known work may be The Shepherd David Triumphant (1895), which shows the young shepherd with the lamb he has rescued. Among her other works were "Cinderella," "Cornelia and Her Jewels," "Corinne," "Fortune Teller," "Maud Muller," "Daphne and Chloe," "Ruth and Naomi," "The Farmer's Daughter," "The Breton Wedding," and some portraits.