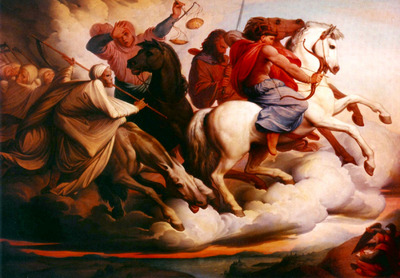 Author name: Edward von Steinle.
(1810, Viena, Austria – 1886, Frankfurt am Main, Germany). He studied at the Akademie der Bildenden Künste in Vienna from 1823. His training under Leopold Kupelwieser had a lasting influence on his work. In 1828 he went to Rome, where he joined Philipp Veit, who influenced his style, Friedrich Overbeck and Joseph Führich. He sketched a Visitation , and an Annunciation for the church of Trinità dei Monti in Rome; these were painted as frescoes by his friend Josef Tunner.
Reference:
http://www.artfact.com/artist/von-steinle-eduard-jakob-swvaf95dxb