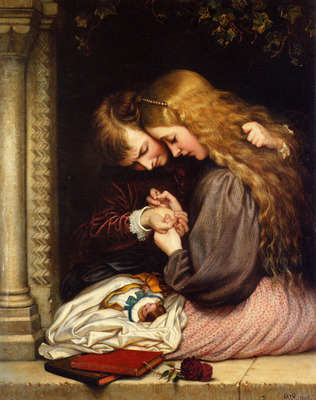 Author name: Charles West Cope.
(1811, Yorkshire, United Kingdom - 1890, United Kingdom). He was an English Victorian era painter of genre and history scenes, and an etcher. He was responsible for painting several frescos in the House of Lords in London. he entered Sass's Academy in Bloomsbury, London, and in 1828 became a student of the Royal Academy. He obtained a silver medal from the Society of Arts in 1829, a second medal in the Royal Academy Life School, and a life studentship. About 1830 he lived at lodgings in Great Russell Street, Bloomsbury.
Reference:
http://en.wikipedia.org/wiki/Charles_West_Cope

Chase William Merritt Over the Hills and Far Away