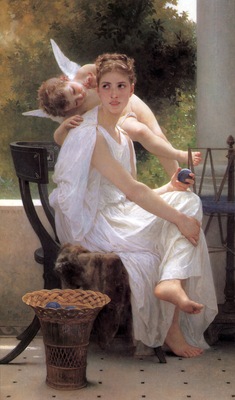 William-Adolphe Bouguereau (November 30, 1825 – August 19, 1905) was a French academic painter. William Bouguereau (French pronunciation: [vijɑ̃ buɡøʁo]) was a traditionalist whose realistic genre paintings and mythological themes were modern interpretations of Classical subjects with a heavy emphasis on the female human body.
Although he created an idealized world, his almost photo-realistic style was popular with rich art patrons. He was very famous in his time but today his subject matter and technique receive relatively little attention compared to the popularity of the Impressionists.

botticelli the temptation of christ detail