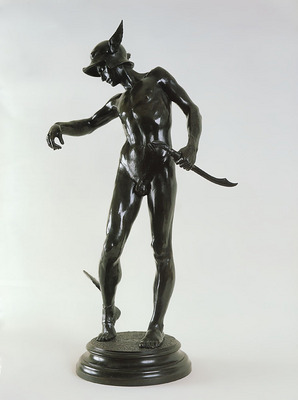 Author name: Alfred Gilbert.
(1854-1934). He was the most influential artist in the New Sculpture movement, which in the last decades of the 19th century strove to release British sculpture from the dead weight of classicism. Gilbert first came into contact with anticlassical tendencies as a student at the École des Beaux-Arts in Paris. From 1878 until his return to London in 1884 he lived in Italy, where he came under the spell of the great Renaissance bronzes of Donatello, Verrocchio, and Cellini, as well as the ampler and more demonstrative sculpture of the Baroque.
Reference:
http://arts.jrank.org/pages/15384/Sir-Alfred-Gilbert.html