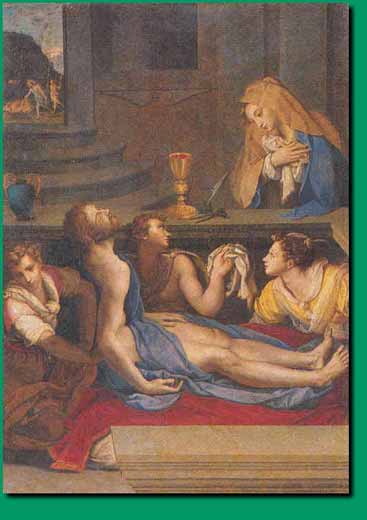 Author name: Alessandro Allori. Also known as Alessandro Bronzino and Alessandro di Cristofano di Lorenzo Allori.
(1535, Florence, Italy -1607, Florence, Italy). He was one of the most prolific and active painters in late sixteenth-century Florence. After a short sojourn in Rome Allori returned to his native Florence. There he became one of the principal painters for the ruling family of Florence, the Medici. Allori was appointed director of the Florentine tapestry factory in the mid-1570s. His work, which displays the complicated twisting poses typical of Florentine Mannerism, influenced artistic developments in Tuscany for almost fifty years following his death.
Reference:
http://www.artcyclopedia.com/artists/allori_alessandro.html
http://www.getty.edu/art/gettyguide/artMakerDetails?maker=730