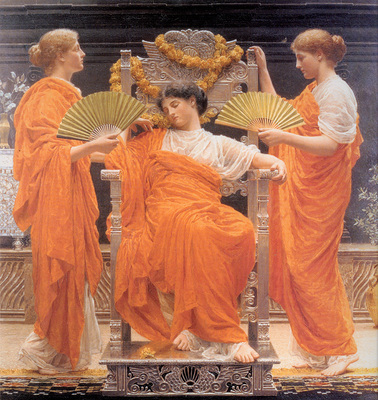 Author name: Albert Joseph Moore.
(1841-1893). He studied at the Royal Academy Schools from 1857, where his contemporaries included Simeon Solomon and William Blake Richmond. His generation he was deeply influenced by the Pre-Raphaelite Movement. Early works include the Ruskinian 'Study of an Ash Trunk' (1857, Ashmolean Museum, Oxford) and religious works such as 'Eliyah's Sacrifice' (1863, Bury Art Gallery) which show the influence of Madox Brown and Bell Scott. He began to produce the decorative works by which he is best known today, in 1860.
Reference:
http://www.allartclassic.com/author_biography.php?p_number=850